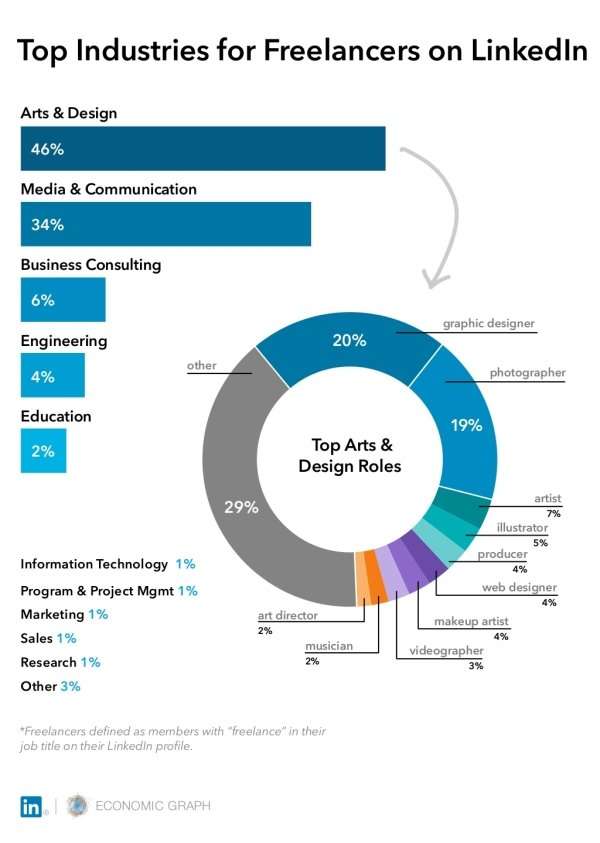 From Boston.com, Justine Hofheer shares information about a new report on LinkedIn that provides insights into the professions of freelancers on LinkedIn.  Justine writes:

LinkedIn analyst Lucy Chen dove into the freelance economy by looking for LinkedIn members who used the word “freelance” in their job title, then aggregated the most common industries and skill sets found. While industries ranged from media and communication, to business consulting, engineering, and education, those in the arts and design field vastly outweighed other fields at 46 percent of LinkedIn freelancers.

But if you were solely imagining these freelancers working in fine arts or graphic design, you’d be wrong. Graphic designers made up 20 percent of the field, and photographers comprised another 19 percent, but there were also illustrators, web designers, makeup artists, and musicians.

Chen figured out roughly how many gigs freelancers were juggling at once by finding members with more than one current role listed on their LinkedIn profile without an end date. On average, she found that most freelancers work on about two gigs at once, though Chen did not determine how many of these people were working full-time jobs concurrently, or working entirely on multiple freelance gigs – but there were clearly both types of freelancers.

Read the full story at What kind of people actually make a living as freelancers? – Jobs news