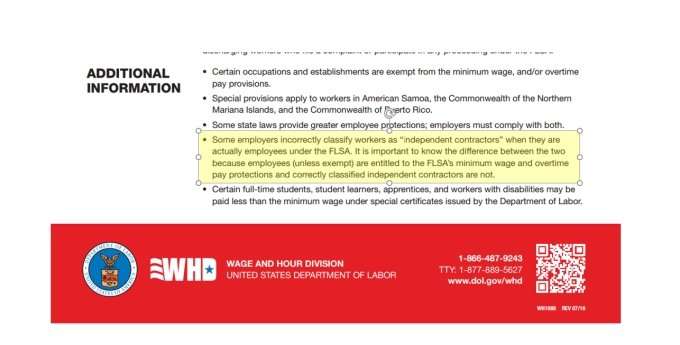 From JDSupra, Travis Vance discusses the new posters developed by the United States Department of Labor and their inclusion of information about the misclassfication of workers as independent contractors and speculates that the poster won’t have much of an effect on the gig economy.  Travis writes:

But will gig workers take notice of the new USDOL poster? Do they even want to be employees?

Probably not. Several studies regarding the mindset of gig workers, like this one, revealed that they don’t value the benefits that accompany a full-time position. One noted, “people who are independent contractors want more flexibility and greater control over their careers, so they may be willing to forgo traditional company benefits like health insurance and paid holidays.”

A gig worker may pay no attention to the USDOL’s new poster. A “gig” job is what the worker wants; he or she desires flexibility. The permanence of a full-time job as an “employee” offers no value to him or her.

Although the updated USDOL poster may play a part in correcting some misclassifying issues, don’t look for gig workers to seek relief under its new provisions.