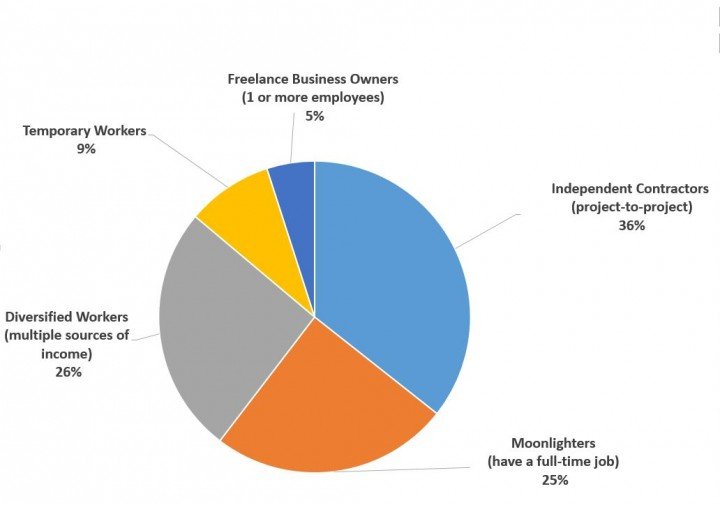 From Mediashift, Kristen Fischer offers her nine most important observations from the Freelancer Union’s annual survey including:

1. FREELANCING IS STILL POPULAR, BUT IS GROWING ONLY AMONG “DIVERSIFIED WORKERS”

Approximately one in three Americans is freelancing, about the same as last year. The Bureau of Labor Statistics estimates that there are 157 million Americans in the civilian work force, which means that 53.7 million are freelancers or have done freelance work in the past year. The number of freelancers increased by 700,000, in proportion to the overall labor force.

Yet among the five types of freelancers the survey defines, only the “diversified workers” category has grown. The survey attributes that interesting result to the rise of the “sharing economy” — exemplified by platforms like TaskRabbit and, yes, Upwork — but could also, if you’re feeling pessimistic, point to a dearth of full-time opportunities.

2. MORE FREELANCERS START BY CHOICE, AND MOST DO IT FOR THE FLEXIBILITY

The rise in choice rather than necessity suggests that freelancing has become a more viable career path. Though “necessity” is an unfortunately vague term, its number is still high — though plenty of people choose a career based on necessity rather than choice.

What may be more interesting is why, exactly, people decide to freelance.

The focus on flexibility is logical, since the ability to set your own schedule is probably the No. 1 advantage freelancing has over full-time salaried work.

3. THE MAJORITY OF FREELANCERS WHO QUIT FULL-TIME JOBS EARN MORE AS FREELANCERS

About 60 percent of freelancers who have left traditional employment (about 23 percent of the total) now earn more money. Of those who earn more, 78 percent said that they made more money freelancing within a year or less of starting their business.