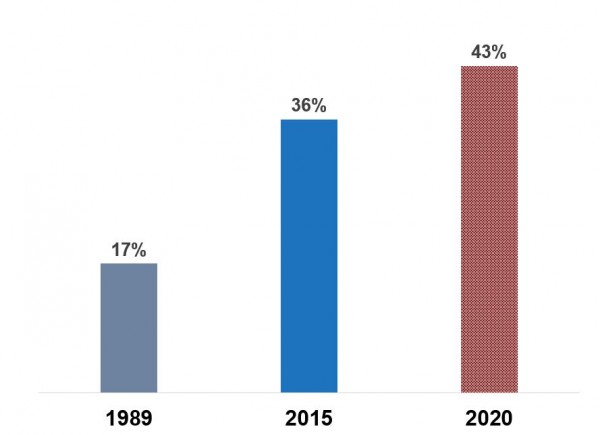 From Inc., Tess Townsend discusses a recent study by Intuit and consulting firm Emergent Research that shows non-permanent workers have increased from 17 percent in 1989 to 36 percent in 2015.  Tess writes:

Non-permanent workers such as freelancers have grown from 17 to 36 percent of the U.S. work force over the past 25 years and are expected to comprise 43 percent of the work force by 2020, according to Alex Chriss, vice president and general manager of Self-Employed Solutions at Intuit.

“If you really pull back the lens, this is a shift in employment that’s been happening for a while, and none of the on-demand stuff is going to change it,” Chriss tells Inc.

Intuit is known for such products and services as QuickBooks, Quicken, and TurboTax–tools commonly used by small businesses and the self-employed.

Chriss pegs growth in the contingent work force to structural changes in employment over the past decades, including a decline in enrollment in defined-benefit pension plans and growth in the average duration of unemployment.

The on-demand economy is also projected to show significant growth, though the general trend of expansion in the number of users of 1099 forms (tax forms for independent contractors) started long before the recent tech boom.Intuit and Emergent Research estimate that 7.6 million U.S. workers will be working regularly in the on-demand economy by 2020, a doubling of the current 3.2 million workers. Of those currently picking up the gigs of the gig economy, 79 percent provide on-demand services part-time.