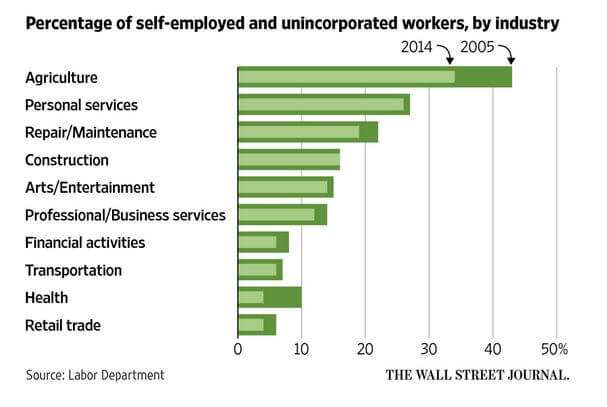 From The Wall Street Journal, Josh Zumbrun and Anna Louise Sussman discuss data that suggests that the gig economy revolution is not much of a revolution.  They write:

“Many workers cobbling a living from tech platforms in the gig economy should be classified as self-employed. But the share of Americans who are self-employed and unincorporated has slowly declined over the past decade, to about 6.5% of workers today, down from as high as 7.7% in 2005 and as high as 8.5% in the mid-1990s, according to Labor Department figures.

Made popular as a jazz term as far back as the 1920s, gig work defies easy definition. The consulting firm McKinsey & Co., in a June report, described it as “contingent work that is transacted on a digital marketplace.” McKinsey estimated that less than 1% of the U.S. working-age population fell into this category, including some people who already work a part- or full-time job.

The Labor Department collects data on workers in different ways: surveying the civilian population to ask if they have jobs, tracking the number of people paying into the unemployment insurance system and surveying companies on the size of their payrolls.

No discrepancy has emerged between people who report having jobs in a survey and the number of people companies report on their payrolls.

Some workers might have a primary job and do some TaskRabbit work on the weekend for extra cash, or sell artisanal greeting cards on Etsy as a hobby. But the share of people who hold multiple jobs is also in decline—only 4.8% of workers do, down from 5.5% in 2005 and 6.3% in 1995.

Alternate definitions seeking to measure the gig economy have produced a range of estimates. The Government Accountability Office recently estimated the “contingent workforce” makes up about 8% of the employed U.S. workforce, using a definition that includes agency temps and on-call workers….” 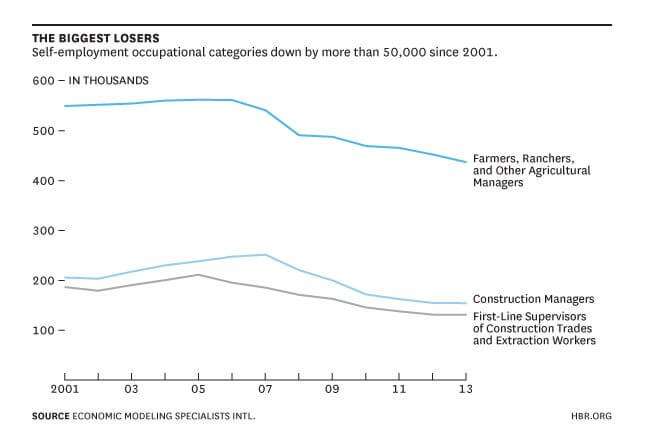 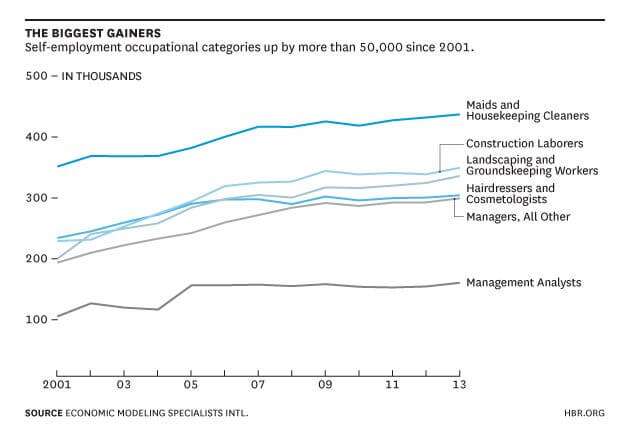 This chart shows that the number of maids and housekeeping cleaners has increased.  In conjunction with the previous chart, it looks the number of farmers is decreasing and the number of maids is increasing.  Even if the total number of self-employed workers stays the same, this is a significant change.  Finally, Justin Fox also provides a chart of businesses without employees.

This chart shows that the number of businesses without employees has grown.

The question of how many self-employed workers are there or how big is the gig revolution may or may not be important depending on what problem you are trying to solve.  The question of whether a worker is an employee or independent contractor is more relevant to Uber drivers than to ranchers.  For the classification issue, it is important to get more accurate numbers to determine the scope of the problem.