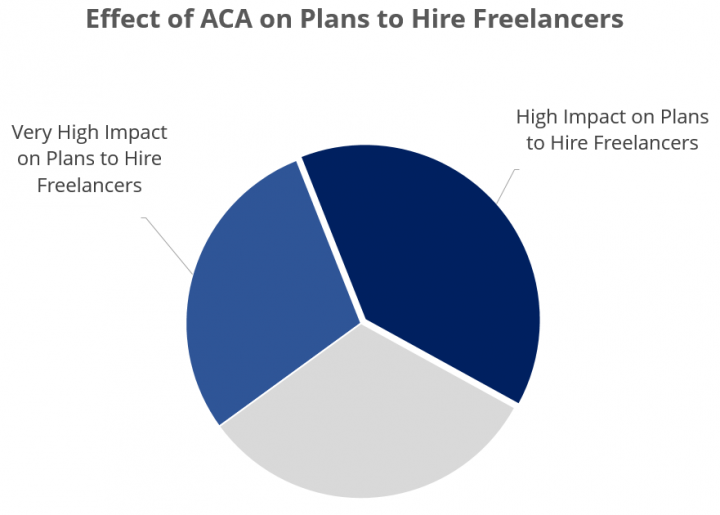 From Forbes, Elaine Pofeldt discusses a recent survey by Field Nation which found that 68% of respondents said that the Affordable Care Act (ACA) had a very high or high impact on their plans to hire freelancers.  Despite the effect of the ACA, 89% of respondents said that they needed to provide healthcare benefits to their employees to keep the best talent.  Elaine writes:

Certainly, even with healthcare price increases, freelancers won’t replace traditional workers altogether. Fifty-eight percent of respondents said they plan to hire more traditional employees than freelancers by 2020, compared to 28% that expect their freelance hires to outnumber traditional ones. The most common way they find freelancers is through online job boards.

Saving on labor costs isn’t the only reason companies are hiring freelancers. Forty-five percent of respondents said it is to bring on specialized skills, 42% said it is easier than managing employees, and 39% said it enables them to be more scalable or provides increased flexibility.

The most common way that companies evaluate freelancers is based on the their results, the survey found, with 49% of companies using this benchmark. The next most common factor is how well they work with a team, cited by 47%. Among respondents, 45% reward high-performing freelancers with bonuses, and 42% give them preferential treatment on future contracts.