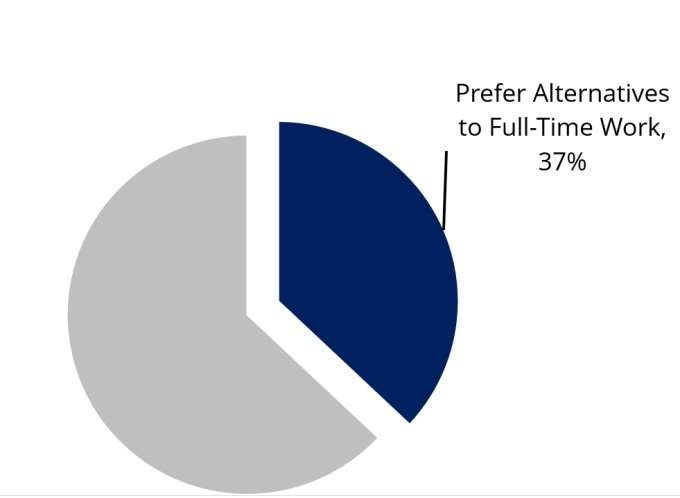 From the Society for Human Resource Management, Roy Maurer discusses the results of a survey conducted by Staffing Industry Analysts. Roy reports that 37% of respondents prefer alternatives to full-time work.  Roy writes:

About 4 in 10 U.S. workers would prefer to work outside of the traditional, full-time, salaried 40-hour workweek, according to new research.

Thirty-seven percent of 7,000 respondents selected alternatives to full-time employment as their preference, with gig work emerging as a leading choice for many.

The finding is from research on the size and scope of the contingent workforce in the United States, conducted by Staffing Industry Analysts (SIA), a staffing advisory firm based in Mountain View, Calif.

SIA defined contingent work as synonymous with gig work—anyone working on a temporary basis across one or more various types of work arrangements, including:

“Understanding who the gig economy workers are and how they engage with work is of critical importance to enterprise success,” said Barry Asin, president of SIA. “With close to one-third of the U.S. workforce active in the gig economy, and spend that is steadily approaching $1 trillion, challenges and opportunities abound.”

According to the research, an estimated 44 million people took on gig work in the United States in 2015. Twenty-nine percent of all U.S. workers performed some contingent work last year, working for either individuals (26 million) or organizations (18 million). Total spending on gig work in the U.S. in 2015 was $792 billion.

“At close to $800 billion, gig and contingent work is a very large sector of the economy, on par with areas that get much more scrutiny and understanding,” Asin said.