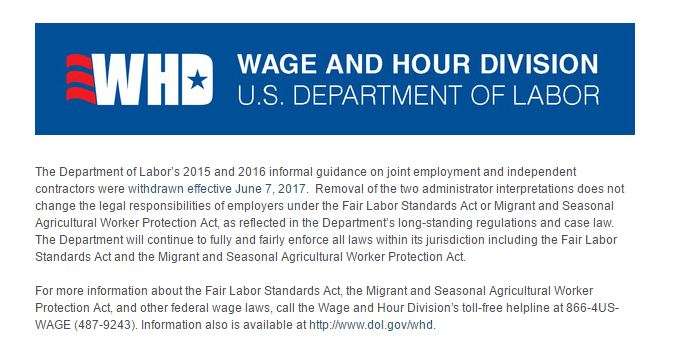 From JDSupra, Richard J. Reibstein discusses the impact of the Department of Labor’s withdrawal of guidance on independent contractor classification. He indicates that this action is not likely to have a significant impact on the legal landscape. Richard writes:

This action today by the Labor Secretary Acosta is likely to be portrayed by many as a major shift in enforcement position of the U.S. Labor Department.  It is, however, unlikely to change the legal landscape of IC misclassification, which is now waged mostly in private class action lawsuits and state administrative proceedings – not by the Department of Labor.

The decision by Secretary Acosta to withdraw the IC guidance is noteworthy, however, as a signal to businesses that the U.S. Labor Department will now likely focus its enforcement efforts on companies that are flagrantly violating the federal labor laws or exploiting low-paid workers, not on those companies that have done little more than fail to structure and document their IC relationships in a compliant manner.

When the 2015 Administrator’s Interpretation was issued, we published a blog post that undertook a comprehensive comparison of the content of the new Interpretation with the Labor Department’s previously stated position on IC misclassification. In that blog post, we expressed the view that the Administrator’s Interpretation was simply a restatement of its long-standing six-factor test, which had resided in one form or another on the Labor Department’s website for many years (and is still there today).  We noted, however, that those six factors were not the only factors that the courts consider in determining IC status under the federal wage and hour law; instead, as the Labor Department had acknowledged on its website in an understated manner, “[t]he Supreme Court has indicated that there is no single rule or test for determining whether an individual is an employee or independent contractor for purposes of the FLSA” and “the courts look at the totality of the working relationship . . . , meaning that all facts relevant to the relationship between the worker and the employer must be considered.”

We concluded that “[a]lthough advocates of expanded employee rights will undoubtedly laud the Labor Department for its bold action in announcing the new guidelines, they should readily acknowledge that nothing in the law has really changed.” We added: “Indeed, this new Interpretation cannot change the law; it simply sets forth the Labor Department’s position on the test used by the courts in determining independent contractor status under the federal overtime and minimum wage laws.” Our takeaways in that blog post were two-fold: first, the Interpretation was an oversimplification of the law; and second, there remained no reason why most businesses using ICs could not utilize strategies and tools to restructure, re-document, and re-implement their IC relationships in a manner that enhanced compliance with the law, as articulated by the legislature and the courts.

The withdrawal of the 2015 guidance on IC misclassification was expected once a new Labor Secretary was nominated by the President and confirmed by Congress. In our blog post shortly after the election, we addressed the impact of President Trump’s election on IC misclassification, concluding that “while it is likely that the U.S. Department of Labor may dial down somewhat their enforcement efforts in this area when the Republican administration takes over the White House and appoints a new Secretary of Labor, there is no reason to expect that state labor departments will be any less aggressive in their efforts to crack down on IC misclassification.”

Our conclusion was based on the fact that state legislatures will likely continue on their current path of passing legislation that curbs IC misclassification, particularly affecting those industries where IC misclassification is regarded as prevalent. We also observed that during the eight years of the Obama presidency, one of the federal government’s initiatives in this area had significant traction with state workforce agencies: the Labor Department’s program of entering into joint/coordinated enforcement efforts with the states. We noted that since the U.S. Department of Labor announced its “Misclassification Initiative” in September 2011, 35 state labor departments had signed a Memorandum of Understanding (MOU) with the U.S. Department of Labor. Of those 35 states, most if not all will  likely continue enforcement of their IC laws.

We also commented in that post-election blog post that the Obama Administration’s Labor Department had mostly focused on the low-hanging fruit – companies that often had little or no defense to the claim that they were misclassifying employees as ICs. In contrast, private class action lawyers focused and continue to focus on more challenging cases or larger or more well-known companies, like Uber, FedEx, Amazon, Macy’s, Lowe’s, DirecTV, BMW, Google, Sleepy’s, and Jani-King, to name just a few.

Our “Takeaway” in that blog post offered some practical advice for companies that currently were using or planned to use ICs to supplement their workforce or render services to their customers – don’t view Mr. Trump’s election as an opportunity to misclassify employees as ICs. Rather, we stated, such companies should expect legal challenges to continue (a) from state workforce agencies, who will likely continue their crackdown on the misclassification of 1099ers and other types of ICs that legally should be treated as W-2 employees; and (b) from plaintiffs’ class action lawyers, who will continue to target companies that fail to structure, document, and implement their IC relationships in a manner that complies with applicable IC laws.