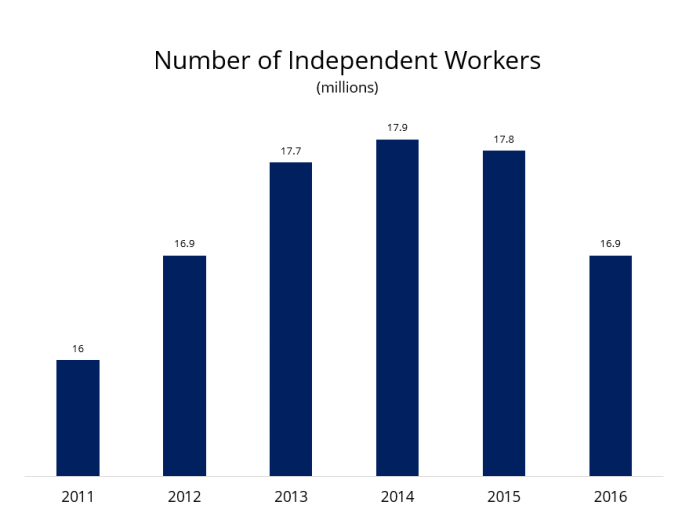 In spite of a 5% decline in headcount this year, independent workers remain a powerful economic force, according to MBO Partners’ 2016 State of Independence in America report. Together, these Independents generate more than $1.1 trillion in annual income, equal to more than 6% of US GDP.

Over the next five years, the research expects the number of full-time and part-time independents in America to grow by 16.4% to 34.1 million in 2021, at which time independents will constitute 29% of the private, non-farm workforce.

Nearly half of full-time Independent workers, 47%, report making more money working on their own than they would in traditional employment, and the average gross income generated from independent work has risen 30% since 2011; 3 million independent workers earn more than $100,000 per year. More than four in 10 have four-year college degrees or higher, including 20% with advanced degrees, and this distinction is even higher among independents’ large Millennial population, where nearly six in ten workers have four-year or advanced degrees. Independent workers are experienced – averaging 10.5 years’ experience – and generally command high salaries, with 28% of the full-time independent population earning more than $75,000, according to the report.

Read the full story at Independent workforce: Decline this year but growth expected in next five years