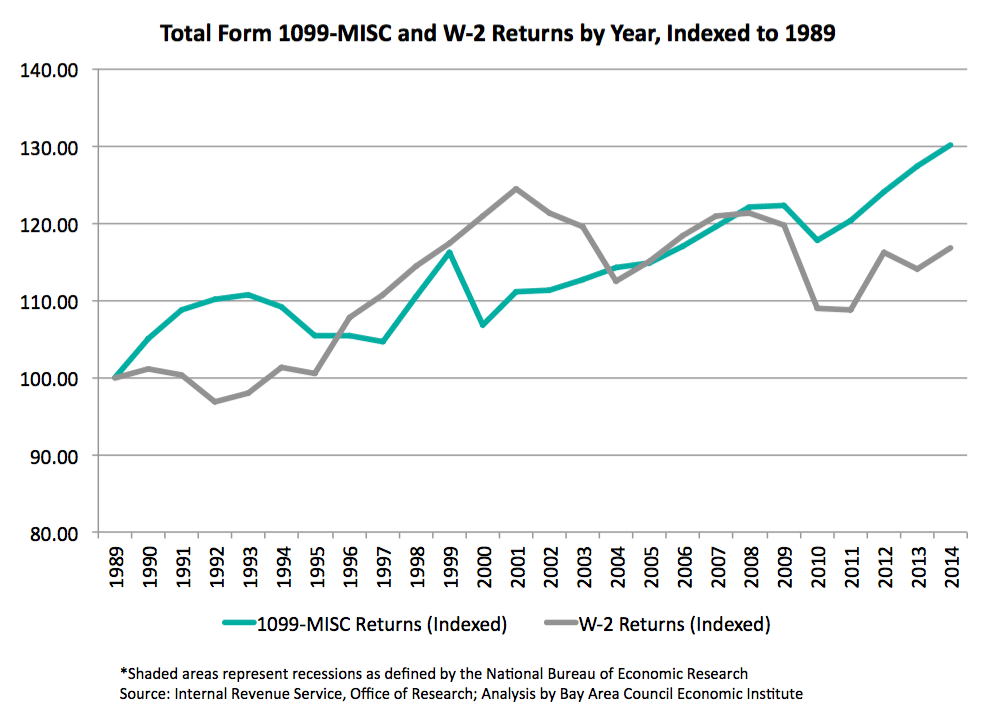 From Fast Company, Sarah Kessler looks at the growth and number of Form 1099’s filed with the IRS compared to the number of W-2 forms.  She recognizes the nuances of this type of data noting that a Form 1099 could represent a $600 or $50,000 engagement.  Still, she presents an interesting way of trying to understand the number of freelancers/independent contractors when there are so many nuances.  Sarah writes:

The percentage of workers who report being both self-employed and unincorporated has declined over the last decade, according to the Labor Department. But when Economic Modeling Specialists Intl. compiled Census and Bureau of Economic Analysis data, they found that the number of workers classified as employees is falling, while the number classified as miscellaneous proprietors is growing. Estimates from private companies range between projecting 7.6 million freelancers by 2020 to claiming there are currently 53 million people in the U.S. working freelance in some capacity. There are also puzzling incongruities in government data. “The employment rate is declining at the same time as the unemployment rate—workers are dropping out of the workforce (and therefore aren’t counted in official government statistics), so how are they making money?” says Steven Hill, the author of Raw Deal, an upcoming book about the perils of the “Uber economy.”

Patrick Kallerman, a research manager at the Bay Area Council Economic Institute, was similarly frustrated with the conflicting metrics. So he asked the IRS for a very simple data set: How many 1099 forms are employers filing? (Employers who pay a freelancer or contingent worker are required to file 1099 forms.)

In 2010, the IRS received about 82 million 1099-MISC forms. Last year, it received about 91 million. This graph shows how the number of 1099 forms has grown since 1989 compared to the growth of W2s, the forms associated with employees….

As you can see, the growth of 1099 forms filed to the IRS is increasing faster than the growth of W2s (you can read Kallerman’s analysis here).

The number of 1099s represents the number of gigs. It’s not the number of people who turned in freelance work, and it doesn’t say anything about the size of the jobs that they’re working. Each 1099 form could represent a $600 freelance writing assignment or a $50,000 consulting gig. There are also nuances in which types of independent work are growing that it doesn’t encompass. “In one way, this is also not a perfect data set, but in another way, at least it’s the actual thing that we want to know about,” Kallerman says, “and we have an actual, official account of it.”

The number of 1099s is consistent with the number of U.S. nonemployer businesses, another metric based on tax return data that shows the number of businesses that have no paid employees (freelancers, for the most part) and is gradually rising.