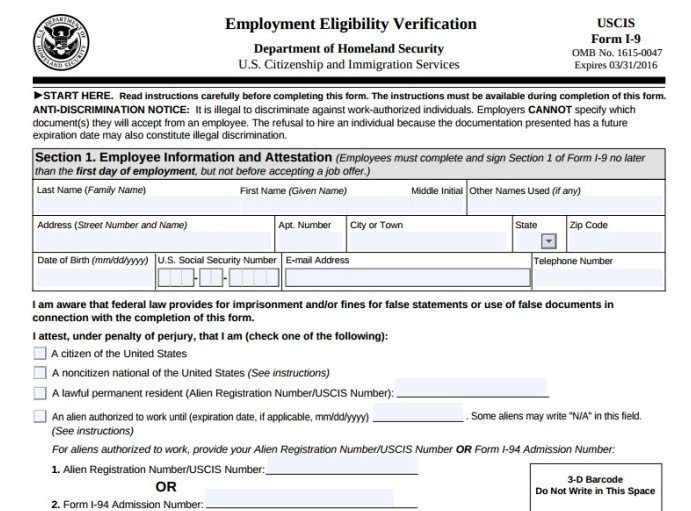 From Bloomberg, Laura D. Francis discusses an area of potential liability for companies that engage with independent contractors — they have to be authorized to work in the United States.  Laura writes:

The rise of the gig economy workforce is forcing a closer look at whether these workers should be considered employees or independent contractors. But with the spotlight on the implications for benefits and wage-and-hour issues, little attention has been paid to another critically important consideration: immigration and employment verification.

There’s a “slew of things” that companies will have to manage if their gig workers are reclassified as employees instead of independent contractors, Jorge Lopez of Littler Mendelson in Miami told Bloomberg BNA March 24.

And having to complete I-9 employment verification forms is “one of the collateral damages,” he said.

Since 1986, the Immigration and Nationality Act has required employers to police unauthorized employment by using the government’s Form I-9 to make sure their employees are authorized to work in the U.S. Failure to do so can result in hefty fines if Immigration and Customs Enforcement pays a visit.

Considering that President Donald Trump has proposed increasing ICE’s ranks and enforcement activities, making sure those I-9s are in order will be critical.

The question becomes one of when a company becomes aware that its workers should be considered employees.

In the case of a court order, employers should maintain proper documentation of that reclassification, including the date on which it occurred, said Lopez, chairman of his firm’s global mobility and immigration practice group.

That date should be considered the “date of hire” for purposes of completing the I-9, he said.

It’s not likely the government would hold improper classification against an employer if there was ambiguity about the workers’ status, Lopez said. So any time there wasn’t an I-9 in place before the workers were classified as employees isn’t likely to affect liability and penalties, he said.

ICE considers the three-day requirement to complete an I-9 to kick in when a worker becomes an “employee,” an ICE spokeswoman told Bloomberg BNA March 29.

Classification Must Be Legit

But employers also need to show that they had a legitimate belief their workers were independent contractors and that they weren’t just classifying them as such to avoid I-9 requirements, Vic Goel, managing partner of Goel & Anderson in Reston, Va., told Bloomberg BNA March 29.

ICE factors good faith into its determination of how much to fine employers, Ceridwen Koski of Ogletree Deakins in Denver told Bloomberg BNA March 23. For example, if an employer conducted a self-audit and discovered that I-9s were missing or improperly completed, it could get credit for correcting those errors, said Koski, a member of Ogletree’s immigration practice group.

But it’s “important to consult with immigration counsel as well as employment counsel in terms of making that determination” that workers are independent contractors at the outset, Goel said.

“ICE is certainly aware of the trend” of the gig economy, said Goel, chairman of the American Immigration Lawyers Association’s Business Immigration Committee.

Read the full story at The Gig Is Up: Immigration Implications for the New Workforce | Bloomberg BNA

See also:  Are Independent Contractors Always Exempt From I-9 Requirements?