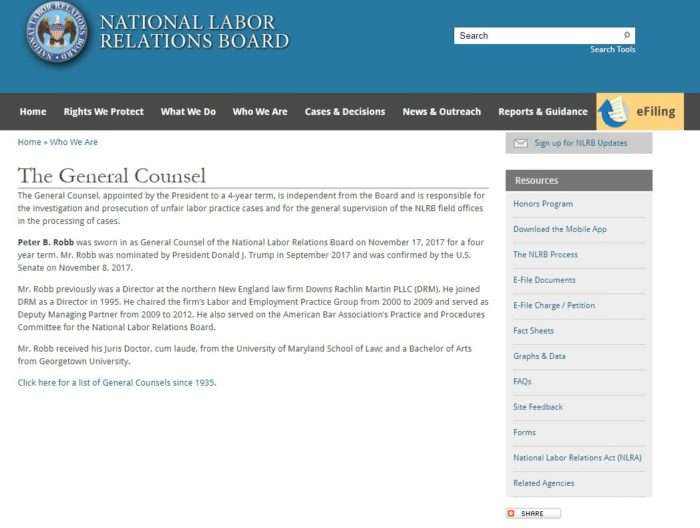 From Mondaq, Article by Tiffany T. Tran and Timothy M. Hoppe discuss the approach taken by the new General Counsel to the National Labor Relations Board in his recent memo. Tiffany and Timothy write:

n GC Memo 18-02, in what may bring some holiday cheer to employers around the country, the newly appointed General Counsel walked back the prior administration’s efforts to transform independent contractor misclassification into a stand-alone Section 8(a)(1) violation.

In an advice memorandum released in 2016, the former General Counsel signaled that he intended to do just that. Pac. 9 Transp., Inc. , NLRB Div. of Advice, No. 21-CA-150875, 12/18/15 [released 8/26/16] involved a contentious unionization fight between the Teamsters and a trucking company that transferred cargo to and from the ports of Los Angeles and Long Beach. The union initially filed an 8(a)(1) charge against the company alleging it interfered with drivers’ Section 7 rights by threatening and intimidating union supporters. The company settled the initial charge, but then issued a notice reminding its drivers (1) that they were independent contractors, not employees; and (2) that independent contractors cannot form unions.

The former administration could have easily just looked at the notice and considered whether it was designed to chill Section 7 rights. Pac. 9, however, went further, characterizing the company’s classification of the drivers (not just the notice), as a preemptive strike designed to prevent employees from exercising their rights. Accordingly, “[a]lthough the Board has never held that an employer’s misclassification of statutory employees as independent contractors in itself violates Section 8(a)(1),” the memo interpreted Board decisions as supporting such a finding.

GC Memo 18-02 seems to restore some sanity to the General Counsel’s approach to independent contractor issues. It could put to rest any notion that merely classifying workers as independent contractors violates the Act. Instead, the General Counsel signals a return to an evidence based standard. If a region has “evidencethat the employer actively used the misclassification of employees to interfere with Section 7 activity,” then the Region should submit the case to Advice.

Even under GC Memo 18-02, employers must still carefully analyze their relationship with independent contractors. Particularly when faced with unionization efforts, the Board will still use a number of unruly agency factors to determine if contractors are, in fact, employees and capable of organizing. But employers can rest a bit easier that they will not be flooded by ULP charges from unhappy contractors merely because of their classification.