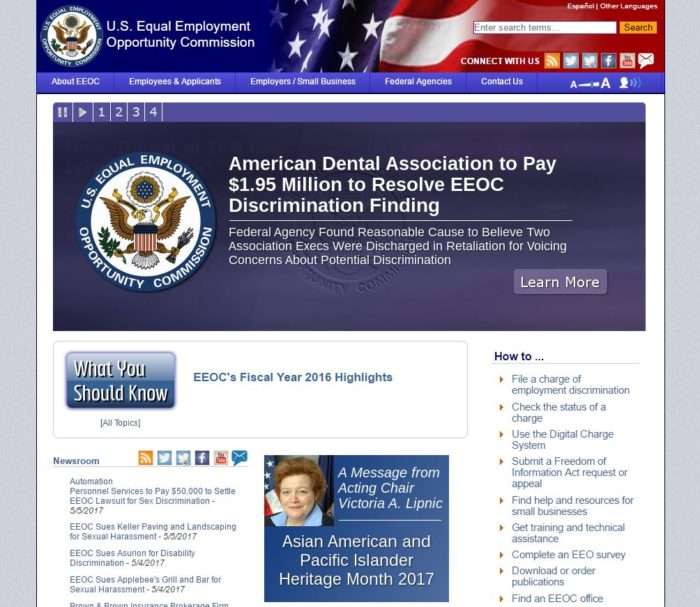 From JDSupra, Benjamin Mann discusses the role the Equal Employment Opportunity Commission (EEOC) may play in the discussion of worker classification.  Benjamin writes:

When the EEOC published its Strategic Enforcement Plan for 2017-2021 in October, the EEOC had identified “complex employment relationships” as an area it wished to explore more closely in the coming months and years. In the Plan, the EEOC specifically identified in its “Developing Issues” category:  “clarifying the employment relationship and the application of workplace civil rights protections in light of the increasing complexity of employment relationships and structures, including temporary workers, staffing agencies, independent contractor relationships, and the on-demand economy.” More recently, the Chair of the EEOC reiterated the EEOC’s interest in focusing on issues relating to gig and other contingent workers.

To date, however, the biggest issue facing the gig economy, in the context of labor and employment law, has been worker classification – whether gig economy workers employees or independent contractors. This issue has been litigated in courts across the country, primarily in the context of the Fair Labor Standards Act and under the watchful eye of the USDOL. As written about on this blog last week, there has been no indication that the Trump administration will tackle this worker classification issue anytime soon, and, historically, the Republican party has taken a more hands-off approach to these types of labor issues, instead focusing on assisting employers with compliance rather than enforcement. If the USDOL drops the reins on the worker classification issue, one can anticipate that the EEOC would be happy to take over the driving duties.

The EEOC’s goal has been and will always be to identify sources of workplace bias and attempt to nip them in the bud. Both domestically and internationally, however, researchers have found that discrimination and inherent biases exist within the gig economy along gender, racial, and religious lines. For example, the EEOC has discussed the existence of “customer preference” discrimination within the gig economy, which can occur where a gig economy website or platform conditions user access to its marketplace on customer reviews. Studies have found that task-sharing sites had more negative reviews of black users than white users, and those who hired female workers were less likely to leave any feedback at all. At least one gig economy company has acknowledged that it incorporates reviews into its algorithm that decides search rankings. If the EEOC wants to quash workplace discrimination in a growing area of the American workforce, it makes sense that the EEOC might start here, which means that companies need to get out on the forefront and ensure their businesses are not out of compliance with civil rights laws.