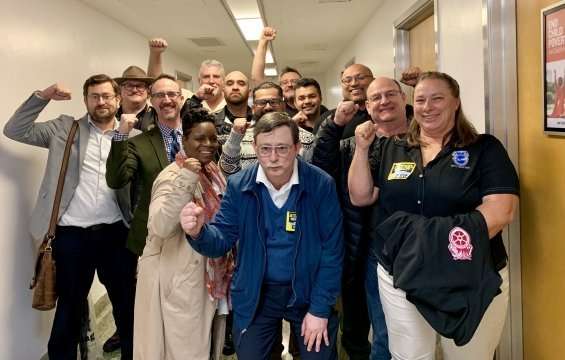 Teamster.org reports that teamsters have been lobbying in favor of Assembly Bill 5 (AB 5) a bill that would codify the ABC test for independent contractor classification adopted by the California Supreme Court. The teamsters support AB 5 while exotic dancers oppose it. (see Exotic dancers rally against local lawmaker over workers rights)

Teamsters from more than 15 locals unions within California Joint Councils 7 and 42 took part in a hearing and lobby day in Sacramento in support of legislation to help end misclassification.

More than 50 Teamsters joined the California Labor Federation at the Capitol to show their support for Assembly Bill (AB) 5. In April, the California Supreme Court’s landmark decision in Dynamex Operations West, Inc. vs Superior Court of Los Angeles, referred to as “Dynamex,” simplified the test for determining whether a worker is classified as an employee for minimum wage and overtime protections. Assembly Bill (AB) 5 is legislation that would codify Dynamex into state law, and make it harder for employers to misclassify their employees as independent contractors.

“Misclassification is an attempt to weaken the bargaining power of workers. Unchecked, it will contribute to ever-widening income inequality and increased corporate power,” said Doug Bloch, Political Director for Teamsters Joint Council 7.

Bloch was a panelist on the California Assembly Committee on Labor and Employment hearing titled, “Dynamex and Beyond: Understanding the Legal and Policy Landscape of Workers Misclassification in California.”

He noted that good employers who play by the rules should not be undercut by companies that misclassify their workers as independent contractors to avoid the minimum wage, payroll taxes, Social Security, unemployment insurance, workers’ compensation and more.

“We urge the passage of AB 5 to help protect and rebuild this state’s middle class,” Bloch said.