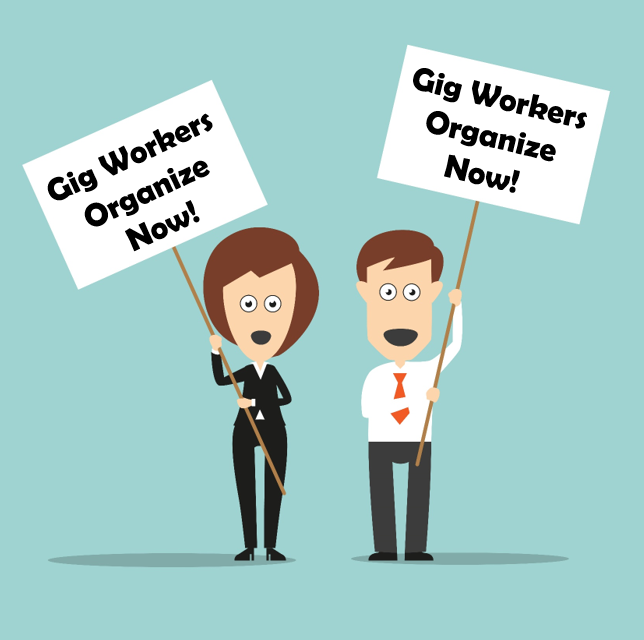 From GovernmentTechnology, Jennifer Van Grove discusses new legislation in California that would allow workers in the gig economy to organize and bargain with employers.  Jennifer writes:

The bill, authored by Assemblywoman Lorena Gonzalez, D-San Diego, seeks to amend state labor law and allow 10 or more independent contractors, who work for “hosting platforms” such as Uber and Lyft, to join in union-like groups and negotiate workplace protections.

Called the 1099 Self-Organizing Act, the legislation applies to businesses and workers who participate in what’s sometimes called the “gig economy” or the “on-demand economy,” where companies use online systems and mobile apps to match laborers with customers.

Gig workers include Uber or Lyft drivers, DoorDash or Postmates food delivery drivers, Handy house cleaners and Amazon “flex” workers who deliver packages. They are technically independent contractors who set their own terms of employment — taking as many or as few jobs as they want — but they have no control over wages, which can be changed at a whim by the companies in charge.

Gonzalez believes there’s a gap in labor law that leaves these workers with few safeguards. Though her bill doesn’t mandate terms, it would provide independent-contractor groups with some bargaining muscle to potentially secure better wages or insurance.

“Obviously our economy is changing,” Gonzalez said. “We think it’s time that our labor laws catch up with that reality.”

She estimates that there are 1 million to 2 million gig workers in California, or roughly 10 percent of the state’s workforce.

“It’s really a free market approach to an innovative economy,” Gonzalez said of her bill. “We can start to regulate this activity. … But as a former regulator, I just think it’s better to allow the workers and the employers to get together and negotiate something that works for both of them.”

Opponents, however, argue that the legislation, in requiring bargaining collectives, undercuts the definition of independent contractor. In granting more power to workers, the bill could also stifle the growth of on-demand companies, which would have to change the way they do business.

“Individuals are now able, like never before, to work for themselves and earn money how, when, and where they want,” said Michael Beckerman, CEO and president of the Internet Association, which represents the interests of Uber, Lyft and other Internet-based companies. “Independent contractors are prevalent in every industry, but this proposal unfairly targets the Internet sector in a way that could hurt the very people it purports to help.”

The 1099 Self-Organizing Act, however, applies to people not just working for tech companies. The legislation would allow a seemingly broad spectrum of independent contractors to unionize, and not in the kind of unions familiar to most Americans.