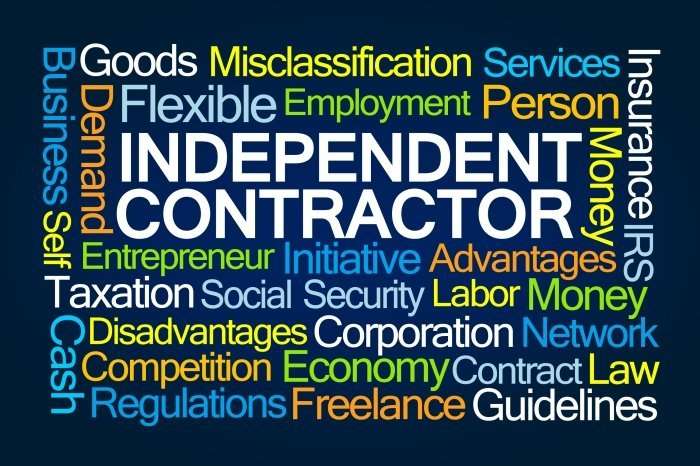 Yahoo Finance shares a press release that warns businesses to continue to make sure that workers are properly classified as employees or independent contractors.  The press release states:

RICHMOND, Va., May 1, 2017 /PRNewswire/ — During the Obama administration’s two terms, businesses that misclassified employees as independent contractors were targeted by federal investigators. The recently elected Trump administration appears to be friendlier to commercial enterprises, but companies that supplement workforces with independent contractors should not view this as an invitation to misclassify workers, warns Betsy Davis, a shareholder in the national law firm’s Richmond office, in a recent client alert.

Under DOL guidelines, the focus has shifted to the economic realities test, weighing economic factors more heavily in the determination of an employee or independent contractor relationship, Davis notes.

Risk of loss—or the possibility of losing money on the assignment—is another key consideration. A worker who is paid by the hour with no risk of loss is more likely to be an employee, as opposed to a worker who may suffer a loss of capital investment based on the manner in which he or she managed the project. Also, a worker who performs services only for one company and uses company equipment is more likely to be deemed an employee. In contrast, a worker who has formed an LLC, uses his or her own equipment and supplies, and performs services for a number of customers stands a better chance of being classified as a contractor.

Still, the DOL takes the position that “simply providing tools does not create an independent contractor relationship if the worker’s investment is small when compared to the investment of the employer,” Davis adds.

“The DOL characterizes misclassification as ‘one of the most serious problems facing affected workers, employers and the entire economy,'” warns Davis. “The change in leadership in Washington will not impact an employer’s need to comply. Government investigators and plaintiffs’ attorneys are focused on the issue. Employers should focus on and review their worker classifications as well.”