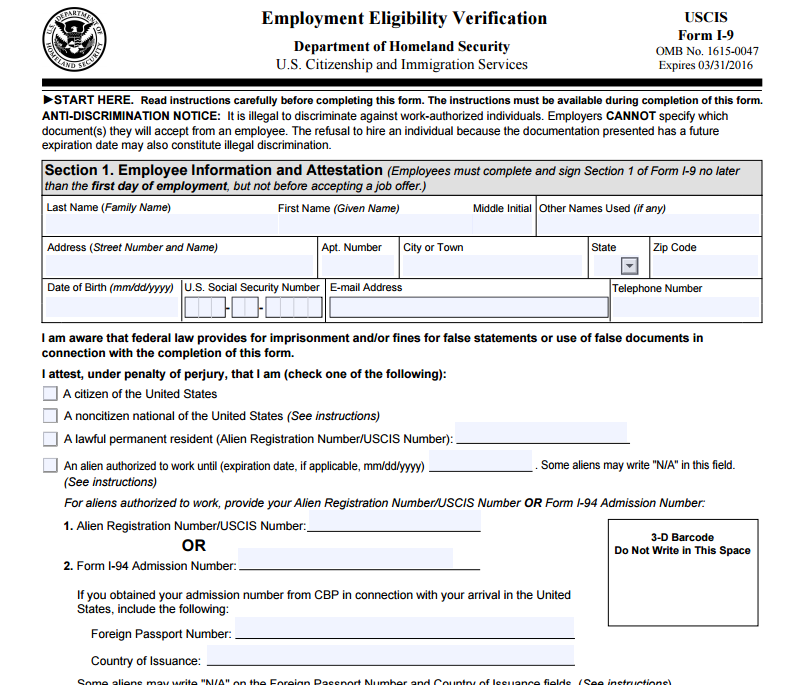 From JDSupra, Yova Borovska provides an excellent analysis of the challenges of using independent contractors and the risk of potential I-9 violations if they are misclassified.  Yova discusses a recent case

A recent decision by the Office of the Chief Administrative Hearings Officer (OCAHO) illustrates the methodology generally used by the courts to answer this question. In U.S. v. Siddikov, ICE filed a complaint seeking penalties for certain I-9 failures and alleging that Saidabror Siddikov d/b/a Beyond Cleaning Services (BCS) failed to prepare, retain or present I-9 forms for six individuals. The owner argued that all six individuals were independent contractors, and that therefore forms I-9 were not required for them. On August 14, 2015, OCAHO issued a decision dismissing the government’s complaint seeking a penalty for I-9 violations and finding that the employer did not have to produce forms I-9 for certain individuals who were deemed to be independent contractors for employment verification purposes.

In order to determine whether an individual is an independent contractor or an employee, OCAHO case law looks at the federal regulations as well as various tests defined in case decisions. Independent contractors are defined by applicable regulations to include “individuals or entities that carry on independent business, contract to do a piece of work according to their own means and methods and are subject to control only as to results.” Among the factors to be considered are whether the individual supplies the tools or materials, makes services available to the public, works for different clients at the same time, directs the order or sequence in which the work is to be done and determines the hours in which the work will be done.

OCAHO case law has observed, in another context, that where an individual provides labor or services only to a third party, and the putative employer has no power to fire the individual, to set the individual’s work schedule or working conditions, to assign work or to supervise the individual, there simply are not sufficient indicia to establish an employment relationship.

A variety of tests have been identified in federal case decisions, including the common law standard test similar to the 10-factor control test as well as an “economic realities” test. The majority of the tests look to the question of control over the details of the work as being of primary importance, and even the economic realities test also assumes that the degree of control or supervision over the work will be a critical component. So does the so-called IRS test, which looks for both behavioral control and financial control, as well as the type of relationship between the parties.

In practice, Courts generally look at the totality of the circumstances and not a single determinative factor or test.

In Siddikov, OCAHO found the following as a matter of fact:

Considering the totality of the circumstances, OCAHO found that, apart from the fact that the actual work itself is unskilled, the remainder of the regulatory and common law factors pointed in the direction of independent status for all six individuals. The government did not present evidence that any of these individuals was an essential part of Siddikov’s normal business operations; they did not work for BCS either full time or exclusively, but simply provided Siddikov with an opportunity to “farm out” jobs he was unable to complete himself. There appeared to be no permanent ongoing arrangements and no obligations on either side, whether for BCS to offer or for any of the individuals to accept, additional jobs in the future.  ICE did not introduce any evidence that the individuals were economically dependent upon Siddikov or BCS for his or her livelihood as contemplated by the economic realities test. Where an individual actually goes to the customers’ own premises to provide relatively unskilled services, such as cleaning carpets or reading utility meters, the tasks to be performed will seldom be directly supervised or controlled by the company offering the services. When an individual provides labor or services only to a third party, and the putative employer has no power to fire the individual, to set the individual’s work schedule or working conditions, to assign work or to supervise the individual, there simply are not sufficient indicia to establish an employment relationship between the individual and the putative employer.

One thought on “Are Independent Contractors Always Exempt From I-9 Requirements?”