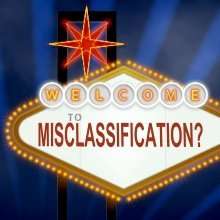 From the Atlanta Journal-Constitution — David Markiewicz writes about the increasingly common occurrence nightclub dancers alleging that they were improperly classified as independent contractors and should have treated as employees.  He writes:

“Another Atlanta strip club is being sued by its dancers who say they were illegally denied a minimum wage.

Brandy Mizner-Klearman and Suzette Maxey said they worked for tips only at Stilettos Gentlemen’s Club on Marietta St. N.W. in Atlanta. They say they also were required to kick back some of what they earned to help pay for security, a DJ and a house mom.

Several local clubs have been sued by exotic dancers in recent years including Magic City, Tattletale Lounge, Pin Ups and Pleasers. Last January, a federal judge ruled that strippers at Pin Ups were employees, not independent contractors, and were entitled to a minimum wage and overtime pay under the Fair Labor Standards Act.

“The business model for much of the industry is contrary to the Fair Labor Standards minimum wage and overtime requirements,” said Charles Bridgers, an attorney with DeLong Caldwell Bridgers Fitzpatrick, the Atlanta firm representing the dancers.

Attorneys for the club have not been reached….”