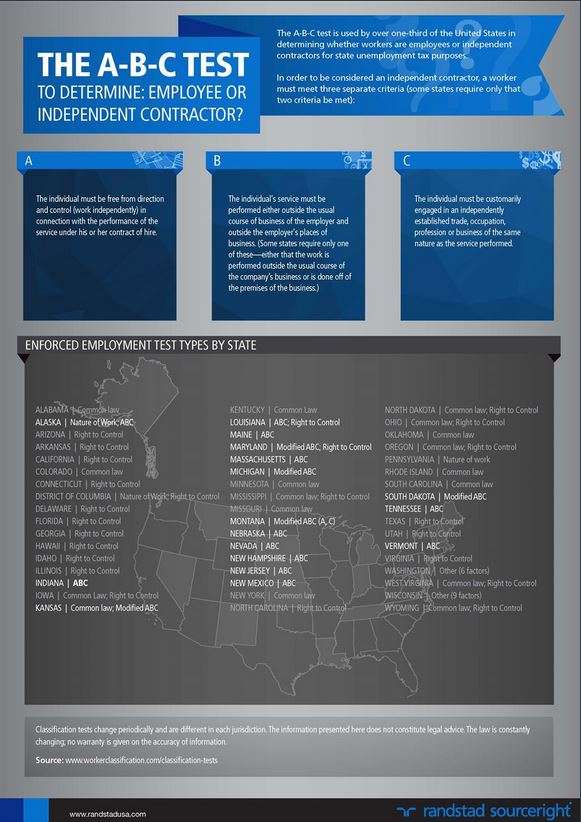 From the Wage & Hour Defense Blog — Michael D. Thompson describes the background leading to the the New Jersey Supreme Court’s determination that New Jersey wage and hour claims should consider the ABC test in deciding whether a worker was an employee or independent contractor.  He writes:

“[C]ompanies defending their independent contractor classifications in either litigation or government investigations under these statutes will be required to show that an individual providing services:

(A)       is free from the company’s control in performing the services;

(C)       is engaged in an independently established business.

The plaintiffs in Hargrove v. Sleepy’s delivered mattresses for Sleepy’s, and filed suit under the New Jersey Wage Payment law (and several other statutes) alleging that Sleepy’s misclassified them as independent contractors.  The case was litigated before the U.S. District Court for the District of New Jersey.

Sleepy’s argued that plaintiffs’ status as employees should be decided under the “right to control” test applied by to ERISA claims by the United States Supreme Court in Nationwide Mutual Ins. Co. v. Darden.

The District Court applied the “right to control” test and concluded that the plaintiffs were, in fact, independent contractors.  The plaintiffs appealed to the Third Circuit Court of Appeals.

In May 2013, the Third Circuit petitioned the New Jersey Supreme Court to answer the following question:

The New Jersey Supreme Court granted the petition by the Third Circuit.

The Supreme Court of New Jersey stated that the “express purpose” of both statutes is to foster “the provision of greater income security for workers.”  The Court asserted that the “ABC” test “operates to provide more predictability” than other tests of independent contractor status, and that there was no good reason “to depart from the standard adopted by the DOL to guide employment status determinations or to disregard the long-standing practice of treating both statutory schemes in tandem.”

For those reasons, the New Jersey Supreme court held that any dispute regarding independent contractor status arising under the Wage Payment Law and the Wage and Hour Law should be resolved by utilizing the “ABC” test….”