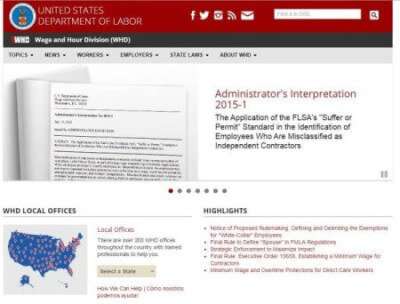 From The Recorder, David Ruiz discusses some of the implications of the recent Administrator’s Interpretation 2015-1.  He writes:

“What section of the memo is prompting the most questions from your clients?

The overarching concern is: Is the government really changing the test? Are they trying to broaden it further? The language that probably causes the most concern is this “suffer or permit” language and what that means. I would say that it’s somewhat meaningless language as a dividing line. Just saying that someone can “suffer or permit,” which is somewhat archaic language, doesn’t really help answer the question “Is this person an employee or an independent contractor?”

Where the test seems to be headed, or at least where the government is trying to push it, is “Are [workers] in business for themselves? Do they have a business?” The government’s point of view seems to be that they hold themselves out, that they have advertising, multiple customers—those types of indicia—as really the driving force on whether or not someone is an independent contractor….”